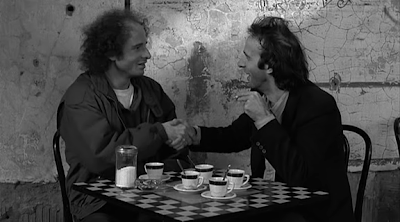 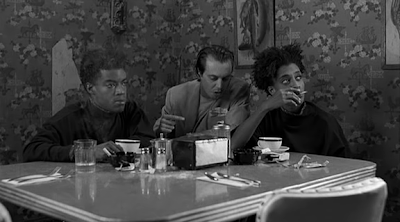 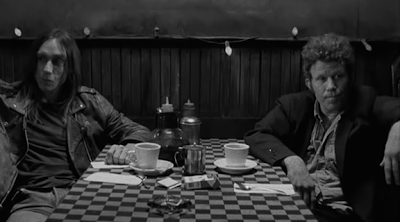 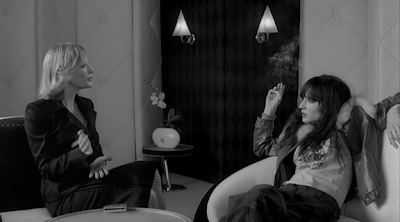 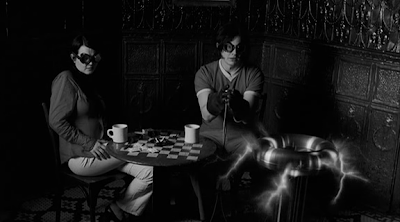 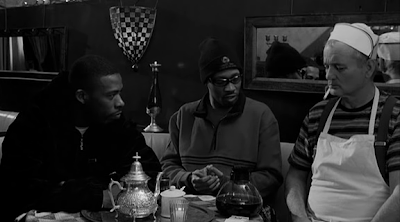 You would expect a movie called ''Coffee and Cigarettes'' to be leisurely, even indolent. To grab a smoke or a cup of coffee, after all, is the preferred way to take a break -- from work, from the stressful routines of ordinary life, from the rush of indistinguishable moments that make up our days. Or at least it used to be, before we starting sipping our lattes on the run out of cardboard cups and before smoking changed from an indoor, social vice into a furtive, solitary sidewalk indulgence.

Shot in black-and-white, as if to give the plumes of smoke and wisps of steam their full cinematic effect, Jim Jarmusch's charming new film, his first since ''Ghost Dog,'' has an unmistakably nostalgic, even elegiac feel. With one exception, the coffee in this series of 11 brief, discursive vignettes is drunk the way it used to be, from serious porcelain mugs, and butts are extinguished in ashtrays made of cut glass or hard plastic.

''Coffee and Cigarettes,'' which Mr. Jarmusch made over 17 years, often during breaks from other projects, is an anthology of conversations, most among famous or semifamous people, who play themselves -- sometimes, sort of. Bill Murray, for example, shows up moonlighting as a waiter, recognized for who he is by his only customers, RZA and GZA of the Wu-Tang Clan. Cate Blanchett appears in all her glossy, blond movie-star radiance playing herself, and also, thanks to some unassumingly tricky camera work, her wayward and resentful cousin, who is a brunette. Like Mr. Murray, Steve Buscemi is waiting on tables, spilling bad coffee on Joie and Cinqué Lee (whose more famous brother, Spike, is mentioned in a later vignette).

Some of the episodes are slight and anecdotal. Jack and Meg White of the White Stripes discuss the physics of the Tesla coil; Steven Wright and Roberto Benigni talk past each other before one of them goes off to a dental appointment. Others have the compact density of good short stories. The cumulative effect is a relaxed, ruminative buzz.

Not that the people on screen are necessarily at ease, with themselves or with one another. There is some loose, riffing coffee talk (notably between Mr. Murray and his herbal-tea-drinking patrons), but most of these brief encounters have a prickly, nervous energy. Under the influence of nicotine and caffeine, and with too much time on their hands, people have a way of getting on one another's nerves. You might think that a meeting between Iggy Pop and Tom Waits would be a kind of summit of uncompromising cool, but in each other's company those musicians turn defensive and passiveaggressive. Even in the most casual exchanges, hidden agendas and unspoken tensions percolate beneath the surface. Mr. Buscemi's idle chatter, and the Lees' response to it, send up a ripple of racial hostility. Two old friends (Isaach de Bankolé and Alex Descas) talk in circles around some unnamed emotional distress before saying their inconclusive and sad goodbyes.

In the two strongest chapters -- the one featuring Ms. Blanchett and another in which Steve Coogan and Alfred Molina play a deft game of celebrity one-upmanship -- such vague discomforts blossom into one-act dramas of envy and suspicion. But the full richness of ''Coffee and Cigarettes,'' which opens today in New York and Los Angeles, can't really be isolated in any single moment or performance, though Mr. Coogan's self-mocking turn is a repellent tour de force.

This movie, which is full of great music, from Mahler to the Skatalites, much of it wafting in from restaurant jukeboxes, has the serendipitous coherence of an old LP. Some of the tracks are stronger than others, but the magic lies in the echoes and unexpected harmonies between the selections. Snatches of conversation and stray thoughts recur like musical motifs, as if the characters were plucking them out of a common ether of insights and ideas. According to one of these (attributed to the physicist Nikola Tesla) the entire world is a kind of instrument, a ''transmitter of acoustical resonances.'' It's a lovely notion, and the implication that beauty and meaning can be found in odd places at unlikely, idle moments resonates through this lovely film.