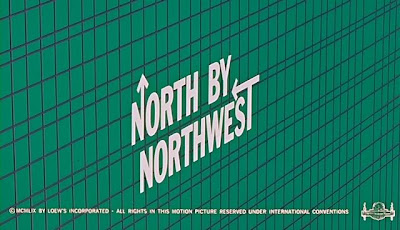 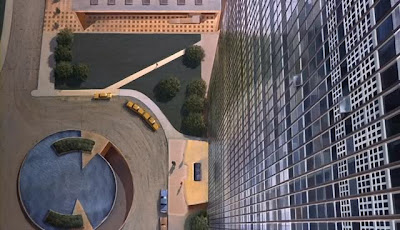 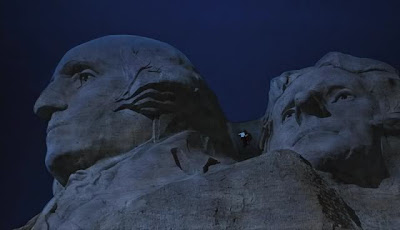 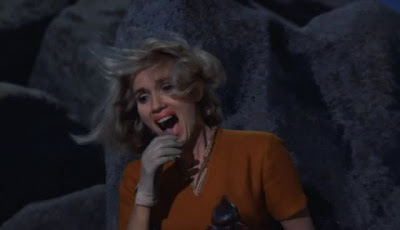 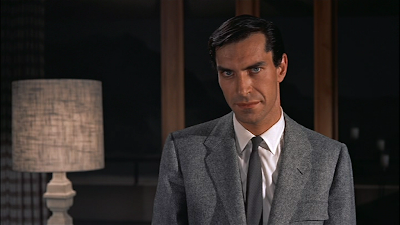 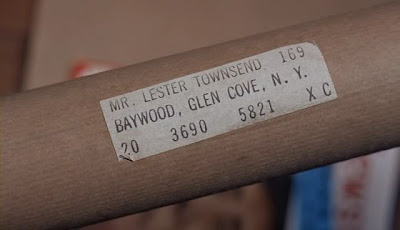 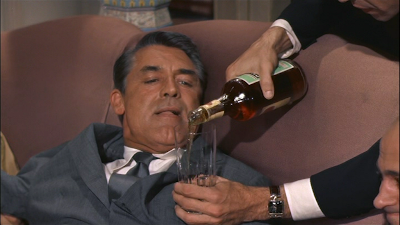 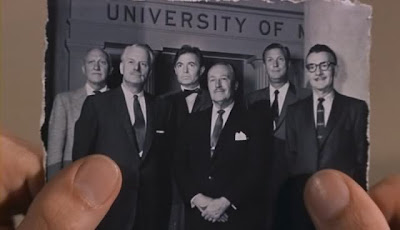 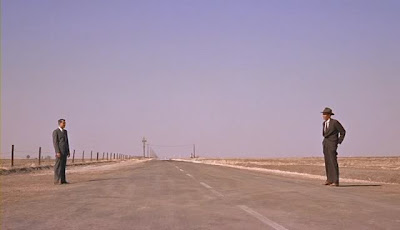 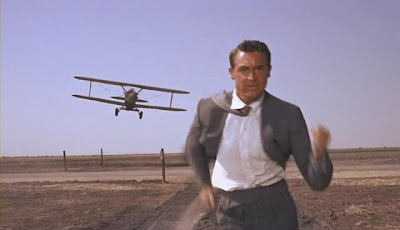 Since he is a peripatetic operative who loves to beat about the bush while beating about the countryside, director Alfred Hitchcock and a covey of willing and able traveling companions have made North by Northwest, which was unveiled at the Music Hall yesterday, a suspenseful and delightful Cook's Tour of some of the more photogenic spots in these United States.

Although they are involved in lightning-fast romance and some loose intrigue, it is all done in brisk, genuinely witty, and sophisticated style. With Mr. Hitchcock at the helm, moving North by Northwest is a colorful and exciting route for spies, counterspies, and lovers.

The director and Ernest Lehman, his scenarist, are not, to put a fine point on it, really serious about their mystery. With a tongue-in-cheek attitude and a breezy sense of humor, they are off in high gear right at the beginning as they spin the somewhat improbable yarn of a successful, handsome Madison Avenue executive, who is mistaken for a Federal intelligence man by foreign agents and forcibly pushed into a succession of macabre situations that shock, amaze, perplex, and anger our once-debonair hero.

Mr. Hitchcock, who, as has been noted, knows that travel is both fun and broadening, quickly shifts his cast from such locales as the Oak Room of the Plaza Hotel and the modernistic interiors of the United Nations Headquarters, to the fancy confines of the Twentieth Century Limited, to the posh Ambassador East Hotel in Chicago, to a vast, flat Midwest cornfield, and finally to the giant faces of the presidents sculptured on Mount Rushmore high above Rapid City, South Dakota.

The complications are introduced with about the same rapidity as the ever-changing scenery. Our beleaguered hero, it appears, is being harried by the villains who want to dispatch him because he seems to be on to their skulduggery. It is, of course, merely a case of mistaken identity, an illusion the Federal boys are desperate to maintain.

In any event, Mr. Hitchcock, et al., take time out now and again to stop strewing red herrings and inject a funny scene here and there, such as one involving our drunken hero in a local hoosegow, or to point up the quickly burgeoning romance between him and the blonde Mata Hari who apparently is aiding the dastards chasing him. Their interlude, to the sounds of slick, romantic dialogue, in a train drawing room, for example, is guaranteed to send viewers' temperatures soaring. The lines and the expert manipulation of the principals are tributes to the outstanding talents of Messrs. Lehman and Hitchcock.

Cary Grant, a veteran member of the Hitchcock acting varsity, was never more at home than in this role of the advertising-man-on-the-lam. He handles the grimaces, the surprised look, the quick smile, the aforementioned spooning, and all the derring-do with professional aplomb and grace. In casting Eva Marie Saint as his romantic vis-à-vis, Mr. Hitchcock has plumbed some talents not shown by the actress heretofore. Although she is seemingly a hard, designing type, she also emerges both the sweet heroine and a glamorous charmer.

Jessie Royce Landis contributes a few genuinely humorous scenes as Mr. Grant's slightly addle-pated mother. James Mason is properly sinister as the leader of the spy ring, as are Martin Landau, Adam Williams, Robert Ellenstein, and Josephine Hutchinson, as members of his malevolent troupe. And Leo G. Carroll is satisfyingly bland and calm as the studious intelligence chief.

Perhaps they and Messrs. Hitchcock and Lehman are kidding, after all. Their climax is a bit overdrawn and there are a few vague spots along the way. But they do lead us on the year's most scenic, intriguing, and merriest chase.