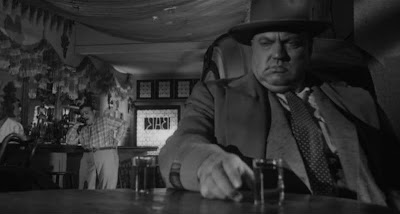 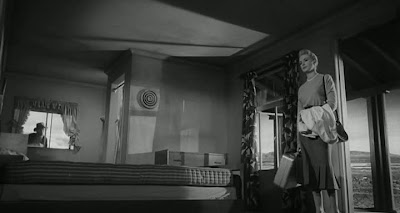 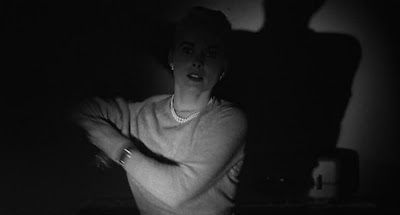 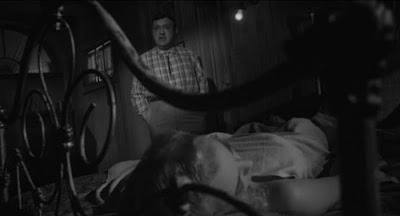 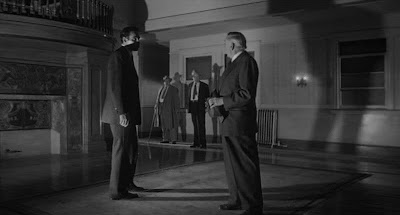 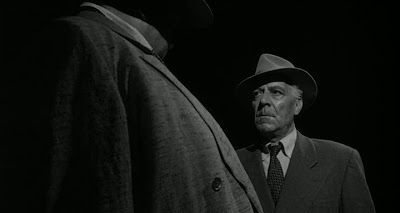 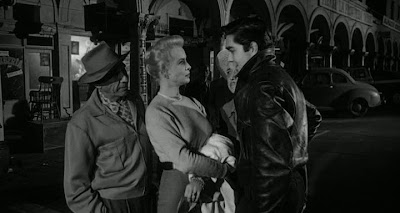 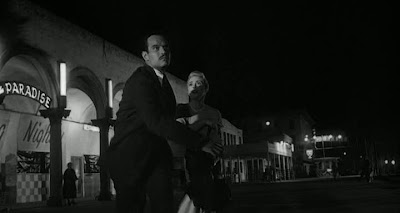 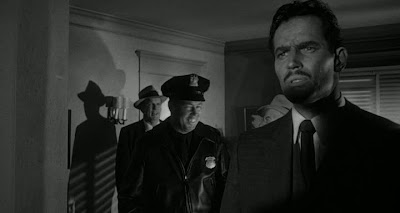 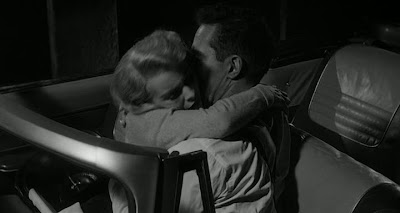 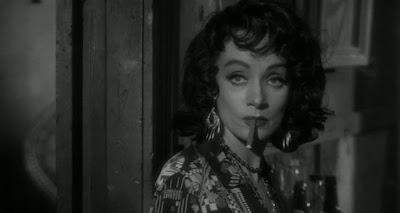 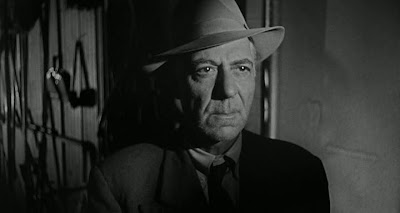 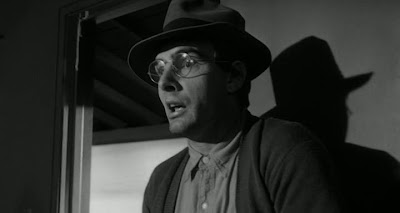 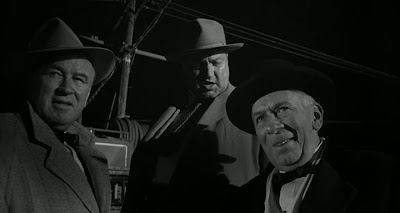 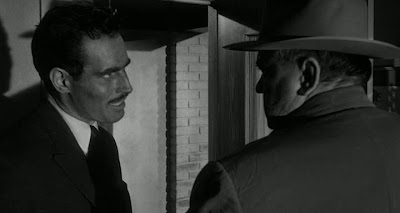 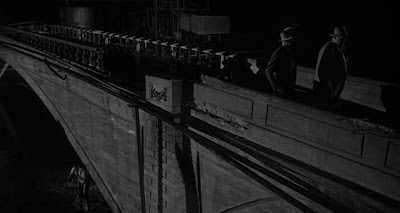 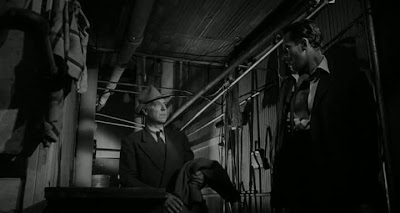 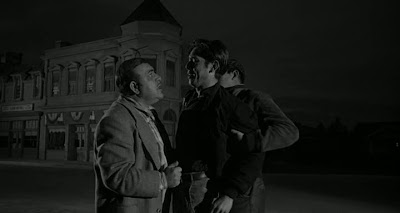 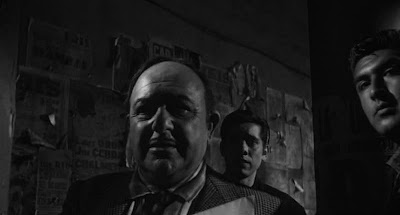 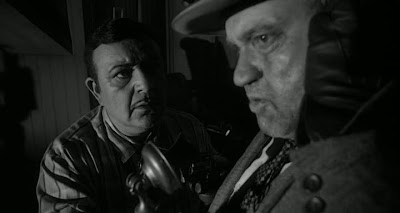 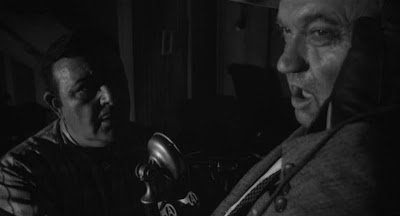 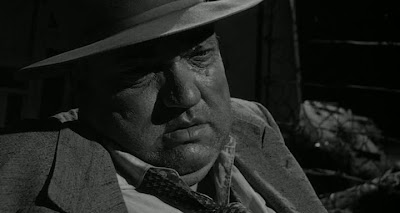 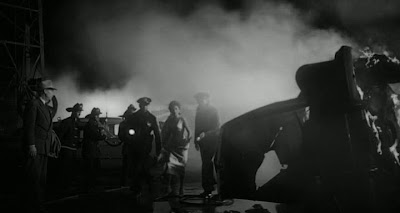 Come on, read my future for me. You haven't got any. What do you mean? Your future is all used up. So speaks a fortune-telling madam, played by Marlene Dietrich, to the drunken sheriff of a border town, played by Orson Welles, in ``Touch of Evil.''

Her words have a sad resonance, because Welles was never again to direct in Hollywood after making this dark, atmospheric story of crime and corruption.

It was named best film at the 1958 Brussels World Fair (Godard and Truffaut were on the jury), but in America it opened on the bottom half of a double bill, failed, and put an end to Welles' prospects of working within the studio system. Yet the film has always been a favorite of those who enjoy visual and dramatic flamboyance. ``I'd seen the film four or five times before I noticed the story,'' the director Peter Bogdanovich once told his friend Orson. ``That speaks well for the story,'' Welles rumbled sarcastically, but Bogdanovich replied, ``No, no--I mean I was looking at the direction.''

That might be the best approach for anyone seeing the film for the first time: to set aside the labyrinthine plot, and simply admire what is on the screen. The movie begins with one of the most famous shots ever made, following a car with a bomb in its trunk for three minutes and 20 seconds. And it has other virtuoso camera movements, including an unbroken interrogation in a cramped room, and one that begins in the street and follows the characters through a lobby and into an elevator. The British critic Damian Cannon writes of its ``spatial choreography,'' in which ``every position and movement latches together into a cogent whole.''

Welles and his cinematographer, Russell Metty, were not simply showing off. The destinies of all of the main characters are tangled from beginning to end, and the photography makes that point by trapping them in the same shots, or tying them together through cuts that match and resonate. The story moves not in a straight line, but as a series of loops and coils.

Some of those loops were removed when Universal Studios took the film from Welles and re-edited it, adding closeups and chopping scenes, so that it existed for years in a confusing 95-minute version, and then belatedly in a 108-minute version that still reflected the studio's meddling. Now at last Welles' original intentions (explained in a 58-page memo to the studio) are reflected in a restored version that is three minutes longer and contains 50 changes, some large, some small. This version was produced by Rick Schmidlin and edited by Oscar winner Walter Murch, inspired by a crucial 1992 article in Film Quarterly by Chicago critic Jonathan Rosenbaum.

The story takes place in Los Robles, a seedy Mexican-American border town (``border towns bring out the worst in a country''). It's a place of bars, strip clubs and brothels, where music spills onto the street from every club. In the opening shot, we see a bomb placed in the trunk of a car, and then the camera cranes up and follows the car down a strip of seamy storefronts, before gliding down to eye level to pick up a strolling couple. They are newlyweds, Mike and Susan Vargas (Charlton Heston and Janet Leigh); he's a Mexican drug enforcement official.

At a border checkpoint, they're eventually joined by the doomed car, which has been delayed by traffic and a herd of goats. Mike and Susan are completing the check when there's an offscreen explosion--and then finally a cut, to the burning car lifting in the air. (I've always felt this cut is premature; better to hear the offscreen explosion, stay on Mike and Susan as they run to the burning car, and then cut.)

Everyone awaits the arrival of Sheriff Hank Quinlan (Welles), a massive, sweaty, rumbling figure who looms over the camera. (Welles was not that big when he made the picture, and used padding and camera angles to exaggerate his bulk.) Quinlan takes charge, ``intuiting'' that the explosion was caused by dynamite. Vargas, a bystander, finds himself drawn into the investigation, to Quinlan's intense displeasure; the movie becomes a competition between the two men, leading to the sheriff's efforts to frame Vargas and his bride on drug and murder charges.

Viewers familiar with the earlier version will not feel they are seeing a different film, but may be able to follow the plot more easily. The most important changes take place in these opening minutes, when the stories of the Heston and Leigh characters are now intercut (the studio positioned all of the wife's hazards with a local gang after her husband's dealings with Quinlan). Another significant change: The opening shot is now seen without superimposed credits (they've been moved to the end), and with music from car radios and clubs, instead of Henry Mancini's title theme (Welles thought source music and sound effects would better establish the atmosphere).

These figures move back and forth across the border, through a series of grim and grungy locations. Although the plot line is possible to follow, the real point is the way Quinlan veers from the investigation to follow his own agenda. He's prejudiced against Mexicans, resents Vargas for invading his turf, and supports ``hunches'' by planting evidence. When Vargas calls him on the fraud, he vows to destroy him.

As Vargas and Quinlan jockey for position in the investigation, Susan is endangered in scenes that work as a terrified counterpoint. Vargas unwisely checks his wife into a motel run by the local gang, and young thugs terrorize her. Her perils sometimes border on the ludicrous, especially in a scene where they shine a flashlight into her room. Later, a gang rape is implied, but the movie curiously ignores or forgets its repercussions for Susan.

Menzies, the deputy, has been faithful to Quinlan because the sheriff once stopped a bullet intended for him. The movie establishes his gradual enlightenment, as Vargas proves that Quinlan planted evidence and framed innocent people. Why does Quinlan stoop so low? Thirty years earlier his own wife was murdered, and the killer went free; now he boasts, ``That was the last killer that ever got out of my hands.''

The final sequence involves the disillusioned Menzies wearing a concealed microphone while prompting Quinlan into a confession. Vargas shadows them with a radio and tape recorder. This scene is visually effective, as the sheriff and deputy follow a garbage-strewn canal, but it's not logical. Vargas wades through water and climbs mountains of debris to stay within radio range of the talking men, when he could simply have hidden the tape recorder on Menzies. And he inexplicably leaves the radio turned up, so Quinlan can hear the echo of his own voice. That works as showmanship even while it fails as strategy.

The surface themes of ``Touch of Evil'' are easy to spot, and the clash between the national cultures gets an ironic flip: Vargas reflects gringo stereotypes while Quinlan embodies cliches about Mexican lawmen. But there may be another theme lurking beneath the surface.

Much of Welles' work was autobiographical, and the characters he chose to play (Kane, Macbeth, Othello) were giants destroyed by hubris. Now consider Quinlan, who nurses old hurts and tries to orchestrate this scenario like a director, assigning dialogue and roles. There is a sense in which Quinlan wants final cut in the plot of this movie, and doesn't get it. He's running down after years of indulgence and self-abuse, and his ego leads him into trouble.

Is there a resonance between the Welles character here and the man he became? The story of Welles' later career is of projects left uncompleted and films altered after he had left them. To some degree, his characters reflected his feelings about himself and his prospects, and ``Touch of Evil'' may be as much about Orson Welles as Hank Quinlan. Welles brought great style to his movies, embracing excess in his life and work as the price (and reward) of his freedom.

Hi there to every single one, it's actually a nice for me to visit this website, it includes important Information.

My webpage ... what is option