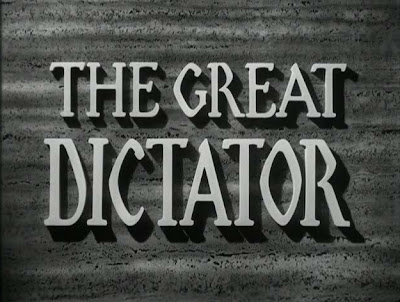 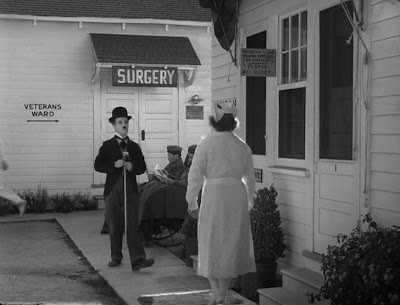 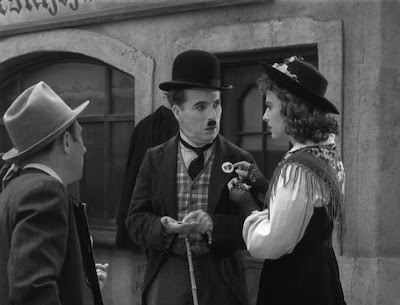 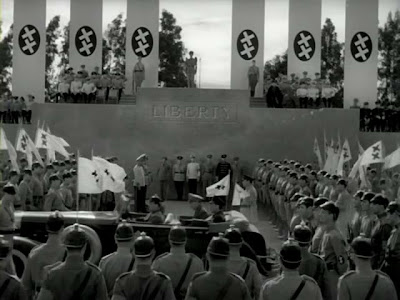 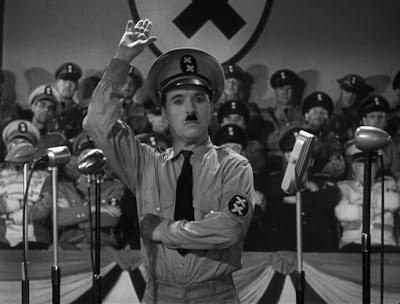 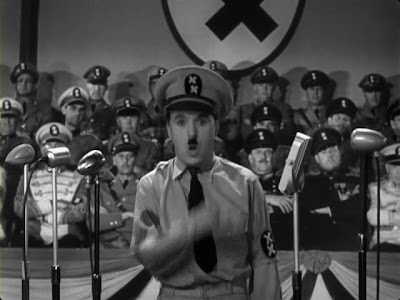 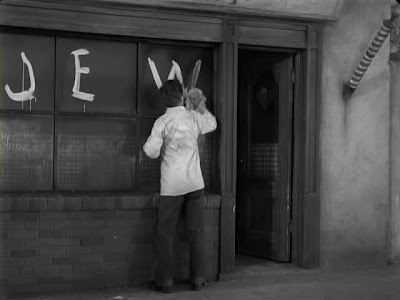 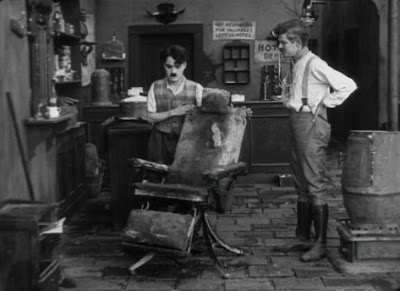 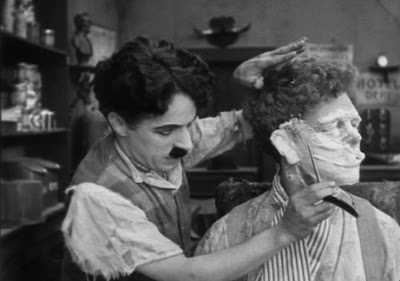 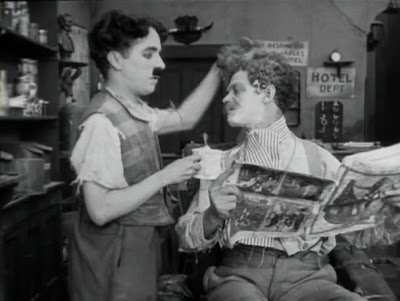 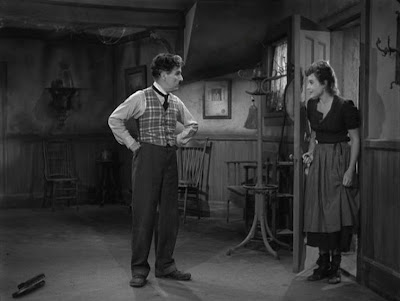 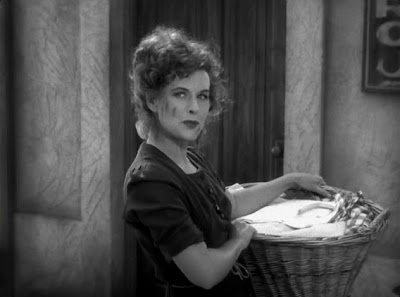 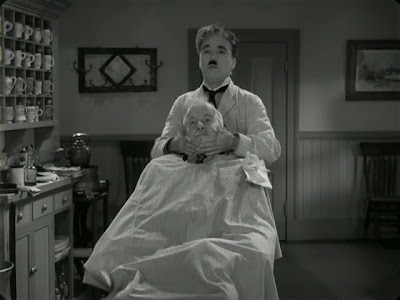 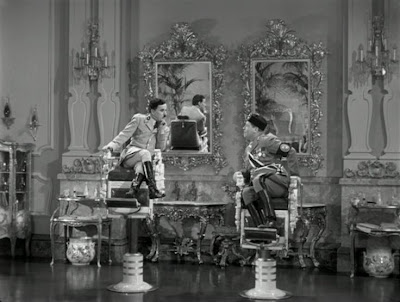 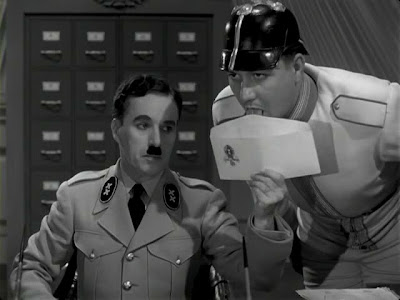 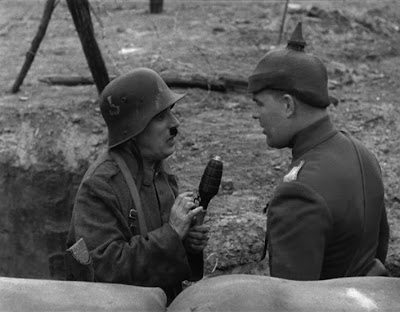 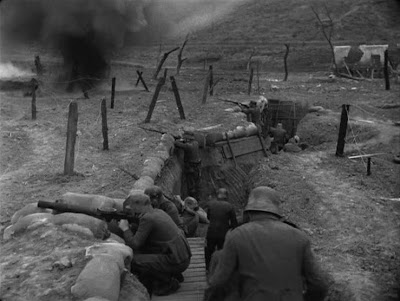 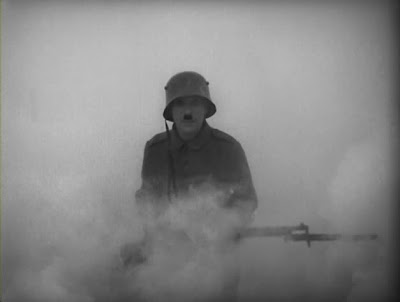 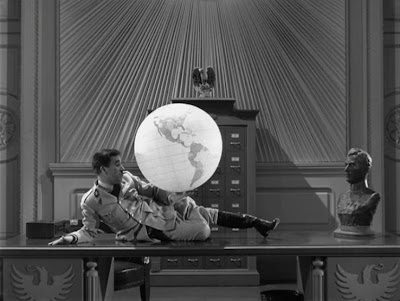 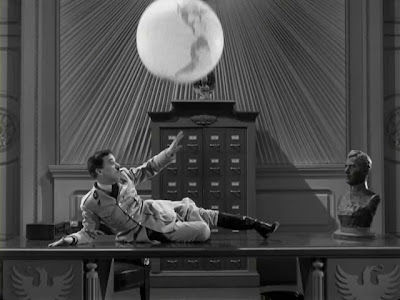 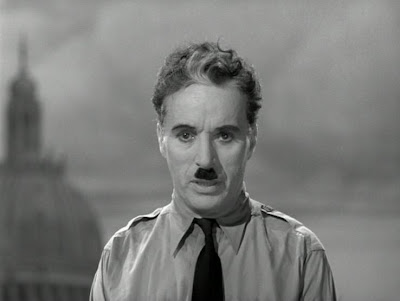 'The Great Dictator,' by and With Charlie Chaplin, Tragi-Comic Fable of the Unhappy Lot of Decent Folk in a Totalitarian Land, at the Astor and Capitol CHAPLIN AT THE PREMIERE
Now that the waiting is over and the shivers of suspense at an end, let the trumpets be sounded and the banners flung against the sky. For the little tramp, Charlie Chaplin, finally emerged last night from behind the close-guarded curtains which have concealed his activities these past two years and presented himself in triumphal splendor as "The Great Dictator"—or you know who.

No event in the history of the screen has ever been anticipated with more hopeful excitement than the première of this film, which occurred simultaneously at the Astor and Capitol Theatres; no picture ever made has promised more momentous consequences. The prospect of little "Charlot," the most universally loved character in all the world, directing his superlative talent for ridicule against the most dangerously evil man alive has loomed as a titanic jest, a transcendent paradox. And the happy report this morning is that it comes off magnificently. "The Great Dictator" may not be the finest picture ever made—in fact, it possesses several disappointing shortcomings. But, despite them, it turns out to be a truly superb accomplishment by a truly great artist—and, from one point of view, perhaps the most significant film ever produced.

Let this be understood, however: it is no catch-penny buffoonery, no droll and gentle-humored social satire in the manner of Chaplin's earlier films. "The Great Dictator" is essentially a tragic picture—or tragi-comic in the classic sense—and it has strongly bitter overtones. For it is a lacerating fable of the unhappy lot of decent folk in a totalitarian land, of all the hateful oppression which has crushed the humanity out of men's souls. And, especially, it is a vithering revelation, through genuinely inspired mimicry, of the tragic weaknesses, the overblown conceit and even the blank insanity of a dictator. Hitler, of course.

The main story line is quite simple, though knotted with many complications. A little Jewish barber returns to his shop in the ghetto of an imaginary city (obviously Berlin) after a prolonged lapse of perception due to an injury in the World War. He does not know that the State is now under the sign of the double-cross, that storm troopers patrol the streets, that Jews are cruelly persecuted and that, the all-powerful ruler of the land is one Hynkel, a megalomaniac, to whom he bears—as a foreword states—a "coincidental resemblance." Thus, the little barber suffers a bitter disillusionment when he naively attempts to resist; he is beaten and eventually forced to flee to a neighboring country. But there he is mistaken for Hynkel, who has simultaneously annexed this neighboring land. And pushed upon a platform to make a conqueror's speech, he delivers instead a passionate appeal for human kindness and reason and brotherly love.

Thus the story throws in pointed contrast the good man against the evil one—the genial, self-effacing but courageous little man of the street against the cold pretentious tyrant. Both are played by Chaplin, of course, in a highly comic vein, beneath which runs a note of eternal sadness. The little barber is our beloved Charlie of old—the fellow with the splay feet, baggy pants, trick mustache and battered bowler. And, as always, he is the pathetic butt of heartless circumstances, beaten, driven, but ever prepared to bounce back. In this role Chaplin performs two of the most superb bits of pantomime he has ever done—one during a sequence in which he and four other characters eat puddings containing coins to determine which shall sacrifice his life to kill the dictator, and the other a bit in which he shaves a man to the rhythm of Brahms's Hungarian Rhapsody.

But it is as the dictator that Chaplin displays his true genius. Whatever fate it was that decreed Adolf Hitler should look like Charlie must have ordained this opportunity, for the caricature of the former is devastating. The feeble, affected hand-salute, the inclination for striking ludicrous attitudes, the fabulous fits of rage and violent facial contortions—all the vulnerable spots of Hitler's exterior are pierced by Chaplin's pantomimic shafts. He is at his best in a wild senseless burst of guttural oratory—a compound of German, Yiddish and Katzenjammer double-talk; and he reaches positively exalted heights in a plaintive dance which he does with a large balloon representing the globe, bouncing it into the air, pirouetting beneath it—and then bursting into tears when the balloon finally pops.

Another splendid sequence is that in which Hynkel and Napaloni, a neighboring dictator, meet and bargain. Napaloni, played by Jack Oakie, is a bluff, expansive creature—the anthesis of neurotic Hynkel—and the two actors contrive in this part of the film one of the most hilarious lampoons ever performed on the screen. Others in the cast are excellent—Paulette Goddard as a little laundry girl, Henry Daniell as a Minister of Propaganda, Billy Gilbert as a Minister of War—but Oakie ranges right along-side Chaplin. And that is tops.

On the debit side, the picture is overlong, it is inclined to be repetitious and the speech with which it ended—the appeal for reason and kindness—is completely out of joint with that which has gone before. In it Chaplin steps out of character and addresses his heart to the audience. The effect is bewildering, and what should be the climax becomes flat and seemingly maudlin. But the sincerity with which Chaplin voices his appeal and the expression of tragedy which is clear in his face are strangely overpowering. Suddenly one perceives in bald relief the things which make "The Great Dictator" great—the courage and faith and surpassing love for mankind which are in the heart of Charlie Chaplin.