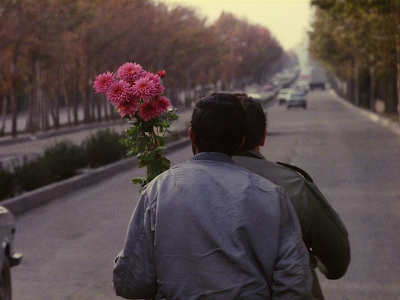 Close-up opens to a shot of a newspaper reporter (Hossein Farazmand) fetching two police officers on a taxi to go to a house on Golzar Street. A mild mannered, unassuming man (Hossein Sabzian) is led away by the officers as the reporter goes door-to-door in search of a tape recorder for the exclusive interview. The film credits appear, and immediately, a pattern emerges: all of the characters are portrayed by themselves, and the story is based of events that actually transpired. The newspapers provide a glimpse into the chaos of the scene - an announcement on the arrest of a "bogus Makhmalbaf" - and Kiarostami (off-camera) begins to conduct interviews with the parties involved. At the courthouse, Kiarostami asks for permission to film the trial, much to the confusion of the magistrate, Haj Agha. After all, why would a director of Kiarostami's stature take interest in a trivial fraud case, when far more serious and pressing cases exist on the court docket? The film then proceeds with the trial, as the participants recount Sabzian's deception and the events that lead up to his arrest. One day, while riding on a public bus, Sabzian reads a book entitled The Cyclist by film director Mohsen Makhmalbaf. The book catches the eye of Mrs. Mahrokh Ahankhah, and Sabzian, a film lover, impulsively claims that he is Makhmalbaf. He is invited into the Ahankhah household where he begins to survey the house as a potential setting for his new film. The Ahankhah family contend that Sabzian was taking an inventory of the house in preparation for a robbery. Sabzian explains that he was merely humoring the family's seeming interest in appearing in his film: a film that he, had he the financial means, would surely make. Soon, the sad, sympathetic portrait of Sabzian's life is revealed: a poor, underemployed printer's assistant, divorced by his wife, who found confidence and self-respect in impersonating the famous film director. But is his remorse genuine, or another act designed to win sympathy from the court? Is he playing a role for the benefit of Kiarostami's camera? Sabzian's true intentions remain ambiguous until the remarkable, deeply moving scene when he meets his impersonated idol, Mohsen Makhmalbaf, in person. It is a searingly honest and intensely personal moment for the reverent Sabzian and gracious Makhmalbaf, that the question arises: are we still watching a film or real-life unfold before us? To Abbas Kiarostami, it is all one and the same phenomenon - a captured moment in the evolving document of life.